Sometimes pecan pie can be sickly sweet, overwhelming the nutty flavor. This pecan pie is our family favorite. My grandmother has been making it for years from her stained, tattered red gingham Better Homes and Gardens cookbook. You will appreciate the simplicity of the flavors and how easy it is to make. 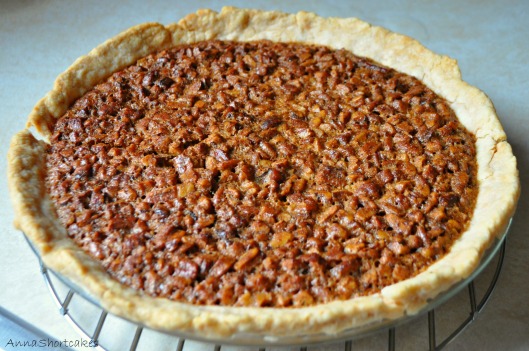 Preheat oven to 350 degrees. Using a mixer, cream together the sugar and butter. Add the syrup and salt, beating well. Beat in the eggs, one at time, until combined. Stir in pecans. Pour the mixture into the pie crust. Bake for 1 hour and 10 minutes, or until a knife inserted into the filling comes out clean. Serves 8 to 10.

My husband eats oatmeal all the time but I am normally a little put off by it. This Southern girl prefers cheesy, buttery grits. Who wants grayish, lumpy mush for breakfast when you can have savory, deliciousness instead?! This recipe may have changed my mind about oatmeal. I love the explosion of flavor in this recipe. It is filling and so easy to make, which makes it especially great for busy work mornings. If I like this oatmeal, I wonder if there are other possible combinations in my future?

Mix the oats and water together. Microwave for 2 minutes. Stir in almond milk and pumpkin until creamy. Stir in the brown sugar and the spices. Top with chopped pumpkins.

So maybe this pie isn’t the most complex in flavor or preparation technique but it’s my favorite. My grandmother always makes this pie and it reminds me of home every time I take a bite. Every year my grandfather and I try to find fresh local strawberries for this pie. Any of those hydroponic styrofoam impostors will not do. My grandmother would make two of these pies and we would enjoy them with our big family lunch. Anticipation of these meals and the fun time spent laughing around the table is one of my most precious memories. When I go home now, I try my best to be there for all the lunches I can. I know they won’t last forever so I want as many of them as I can.

Bring sugar, water and cornstarch to a boil over medium heat. Cook stirring constantly for 1 minute or until thickened. Stir in strawberry gelatin until dissolved. Remove from heat; chill 2 hours. In a bowl, combine the gelatin mixture with the strawberries. Pour into the pie shell. Cover and chill 2-4 hours. Serve pie with whipped cream if desired.

Celi at The Kitchen’s Garden posted a request to see photos of her reader’s backyards. Though I am a bit late, here is the view from my back deck. It’s one of my favorite places. Most nights you can find us eating supper and just chilling here. I’d love to see your view too! Post it and send me the link.

National Pi Day is a celebration of the Greek letter  “π”, which represents the constant ratio of the circumference of a circle to its diameter — which is approximately 3.14159.

You know you remember this from algebra, right?

Truth is, I don’t either.

What I do remember is that I love PIE! Apple, peach, pecan, pumpkin, chocolate, coconut, berry, lemon, lime, custard… You name it, I like it… And I bet you do it. So to celebrate National Pi Day, why don’t you whip up a delicious pie. If you use this recipe, it won’t take much time at all.

Preheat the oven to 400 degrees. In a small sauce pot, combine the berries, cornstarch, and sugar until well combined. 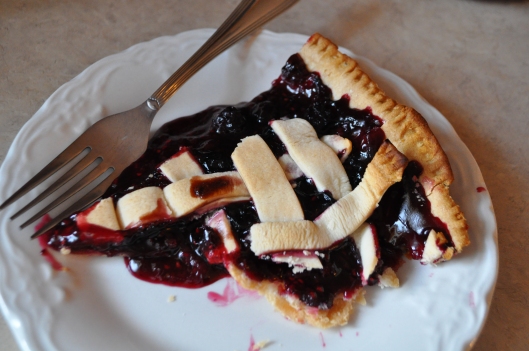 In a 9 inch glass pie plate, lay out the first pie crust evenly. Pour the warmed berries into the crust. Top the crust as you would desire, using the lattice pattern or laying the second crust over the berries, being sure to cut in some air holes in pretty pattern. Using strips of foil, cover the pie crust edges so they don’t burn. Place in the oven and bake for 30 minutes. Remove the foil and bake another 15 minutes. Allow to cool before cutting. Enjoy!

The cool, crisp air puts me in the mood for crisp apples and warm flavors. This apple pie is perfect for the fall. The fully in-season apples. The comforting cinnamon and nutmeg. My aunt’s favorite recipe, this pie embodies all the good things a pie should be.

To Make Topping: Combine 1 cup flour, 1/2 cup brown sugar, 1/2 cup white sugar and 1 teaspoon cinnamon; cut in butter until crumbly. This could be done with a food processor.

Layer apple slices in pie shell, higher in the middle. Pour left over juice from apple mixture over apples. Pat the brown sugar topping evenly over apples to make a top crust.

Bake for 15 minutes on the 450 degrees. Reduce oven temperature to 350 degrees F and bake for 45 minutes to one hour; bake until center of pie has no resistance. If top starts to get too dark, cover with piece of foil. Cool on wire rack before serving. Makes one 9 inch pie. 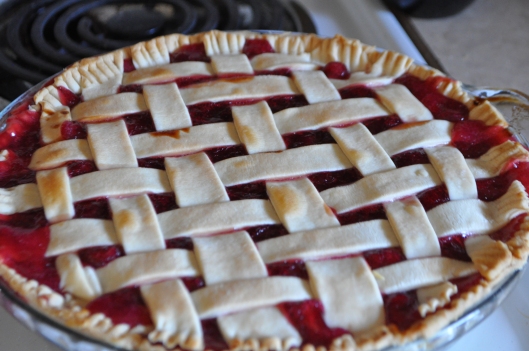 In a saucepan, heat cherries and sugar until sugar is melted. Remove 3 tbsp of cherry juice and whisk into it the all purpose flour, being sure to get out all the lumps. Stir the flour/juice mixture back into the cherries and heat until the filling starts to thicken. 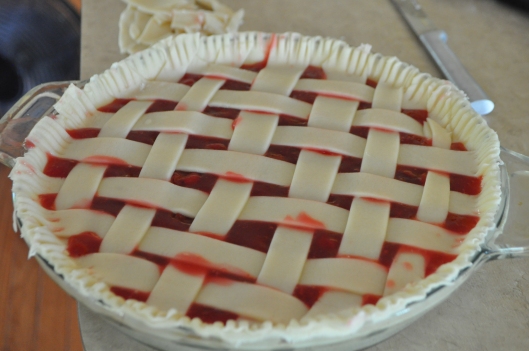 Preheat oven to 400 degrees. In a glass pie plate, place the first layer of crust. Pur pie filling into the crust. Top with second crust in desired fashion. I did a lattice but if you dont want to take that time, you could just cut a small design (this allows the steam to escape). Wrap a thin edge of foil over the pie crust edges and place into oven. Bake for 30 minutes. Remove foil from edges and place back in oven. Bake for another 10 minutes or until the crust is nicely browned. When you remove the pie, be careful because sloshing pie filling onto your skin would result in a killer burn. Allow to cool some before serving with ice cream or enjoy in it’s simplicity.

This is the perfect recipe…

Excellent flavor, a small ingredient list (4 to be exact), a short prep time (max 20 minutes of hands on time), and a great presentation. What more could you ask for?

And it is gluten free! My friend Jason bemoans the lack of desserts he can eat since most bakery treats contain gluten. I am super excited to find this recipe because it is lovely in the eyes of most beholders.

Preheat the oven to 350°F. In a food processor, process butter and one-third of coconut until mixture forms a ball, 1 to 2 minutes. Transfer to a medium bowl. Sprinkle remaining two-thirds coconut over mixture and combine with your fingers.

Press coconut mixture into bottom and up sides of pan to form crust, leaving top edges loose and fluffy. Place a foil ring over edge to prevent burning. Bake until center begins to brown, 10 to 15 minutes; remove foil and bake until edges are browned, 4 to 5 minutes more. Transfer pie plate to a wire rack to cool completely.

Bring cream just to a boil in a small saucepan; pour over chocolate in a medium heatproof bowl. Let sit 10 minutes, then stir until chocolate is completely melted and mixture is combined. (I used a whisk to combine mine better.) Pour into coconut crust. Refrigerate until filling is set, 1 hour or up to 1 day.

I have previously posted this recipe but it was in combination with the filling recipes. I think it is worthy of it’s own post. 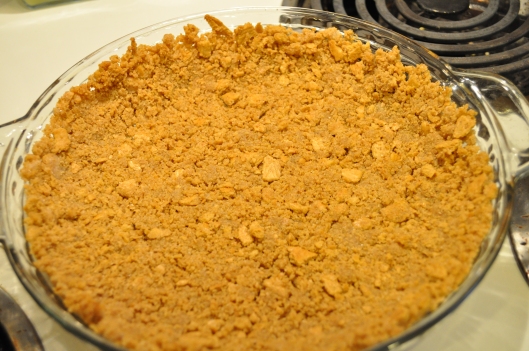 Mix graham cracker crumbs, sugar, melted butter or margarine, and cinnamon until well blended . Press mixture into an 8 or 9 inch pie plate. Bake at 375 degrees F for 7 minutes. Cool. If recipe calls for unbaked pie shell, chill for about 1 hour. 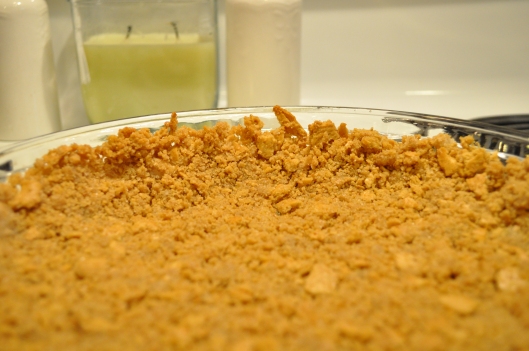 Ok, so I couldn’t find any key limes so I used the usual kind you find in the grocery all year round, Persian limes. I think it turned out very good, though I have to admit it is not “authentic”. Oh well… maybe next time…

Preheat oven to 350 degrees F. In a medium bowl, combine condensed milk, sour cream, lime juice, and lime rind. Mix well and pour into graham cracker crust. Bake in preheated oven for 5 to 8 minutes, until tiny pinhole bubbles burst on the surface of pie. DO NOT BROWN! Chill pie thoroughly before serving. Garnish with lime slices and whipped cream if desired.

The phrase “As American as apple pie” is proof just how much people love pie! All kinds of pie. Cherry pie, pumpkin pie, pecan pie, chocolate pie, coconut pie, key lime pie, sweet potato pie, chess pie, blackberry pie, peach pie. There is a pie for everyone! And it can be found in American pop culture everywhere. Don Mclean’s “American Pie” released in 1972, the movie American Pie released in 1999, A Prairie Home Companion often thanks Beebopareebop Rhubarb Pie (a fictional sponsor that sells frozen rhubarb pies), famous comedian Soupy Sales became popular in part to his taking a pie to the face for comic relief. There are so many other examples.

Parade magazine featured pies in this week’s edition.  They posted some pretty interesting statistics about pie. Including this fact- 1 in 5 Americans have eaten a whole pie all by themselves! A great source for information about pie is Pie Maven. According to the article, your favorite pie flavor is also a commentary on your personality.

Your choices are- apple, pecan, chocolate, or pumpkin…..

Pick which is your favorite……

Now see what it means….

I wonder what chocolate bourbon pecan pie says about you. Maybe that you are a slightly cooky, loving drunk. That would not described me at all 😉

Preheat oven to 325 degrees F. Roll out your pie crust and sprinkle the chocolate chips evenly over the bottom. In a small saucepan combine sugar, corn syrup, and butter. Cook over medium heat, stirring constantly, until butter melts and sugar dissolves. Cool slightly. In a large bowl, combine eggs, bourbon, vanilla, and salt. Mix well. Slowly pour sugar mixture into egg mixture, whisking constantly. Stir in pecans. Pour mixture into pie shell. Bake in preheated oven for 50 to 55 minutes, or until set and golden. May be served warm or chilled.