These little sandwiches are pretty dang tasty. Umami overload. My favorite. Next time I will add roast beef or pastrami. A delicious meal with very little effort. 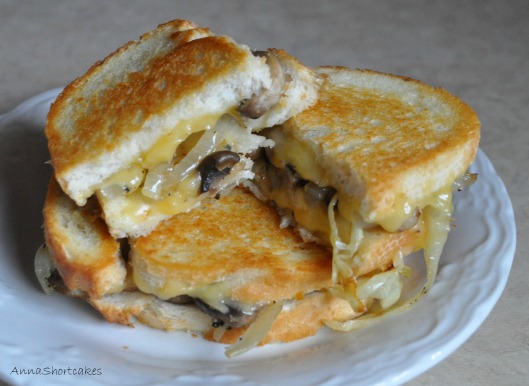 Preheat oven to 400°F. On a baking sheet,  toss sliced mushrooms and onion in olive oil, salt and pepper. Roast the veggies for 20 to 25 minutes, until lightly browning around the edges.

In a non-stick skillet, melt the butter. Take the four slices and dip them in the melted butter. Be sure that the butter is evenly coating the four sides. Remove the skillet from the heat. Assemble the sandwiches in skillet in this order- bread (butter side down), 1/4 of the cheese, roasted onions and mushrooms, 1/4 of the cheese, bread (butter side up). Lightly press together to help things settle. Grill over medium heat until each side is lightly browned and the cheese is melty. Inspired by this recipe.

I made these little sandwiches to accompany some Sketch-Free Broccoli Cheese Soup (recipe to follow). I love fresh apples but sometimes struggle to find savory ways to use them. Be sure to use a tart apple with a firm texture. You really want a punch of flavor and a good crunch when you bite into this delicious sandwich. 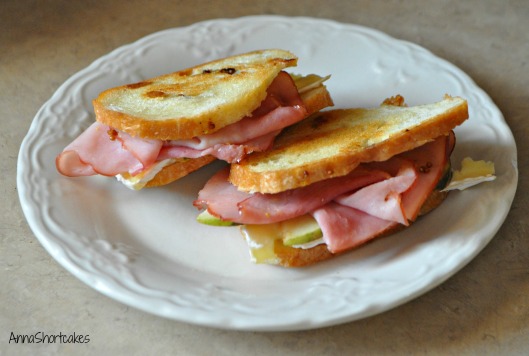 Butter one side of each slice of bread. Place two slices of the bread, butter side down in a non-stick skillet. Layer each sandwich in this order – 2 oz ham, 2 oz brie, 1/4 apple, 1 tbsp whole grain mustard. Top each sandwich with the last slice of bread. Grill until browned on each side and the cheese is melted. Serves 2.

What do you do when you plan on burgers only to realize you don’t have buns?! You make patty melts! 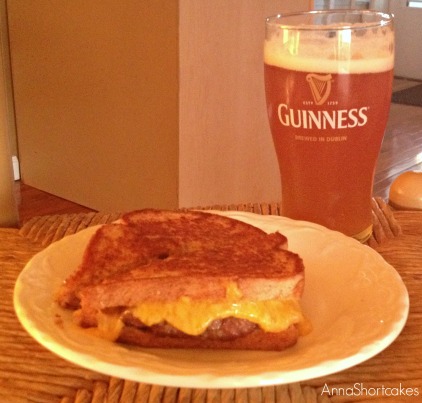 Prepare you grill to medium heat. In a bowl, combine the pork and the cumin. Divide pork mixture into four even balls. Press each one into very thin patties. Grill until cooked through, about 4 minutes per side.

The Kentucky State Fair is being held in Louisville this week. My husband and I plan to visit on Friday. I am super excited! When I was a kid, my grandparents used to take my siblings and I every year. We would have a group discussion about when we should go- the beef cattle week or the dairy cattle week. (There are many points to consider here. 1) We grow beef cattle. Do we really want to see what we know already? 2) What other animals are there this same week? Pigs? Fowl? Goats? Sheep? Mules and horses? 3) What did we see last year? There are other points but you get the idea.) We would get up really early and make the two hour drive to the fairgrounds. Then we would meander around for hours, looking at all the exhibits. Some of them twice. On the way home, we would discuss the whole experience and each try to pick out our favorite part of the day. This usually occupied us until we got home or we fell asleep.

Food was also a big point of consideration. Under the food tent are so many things that need careful consideration. Which to choose – pork or beef or catfish or mutton from their local producers? Do we leave room for the Erhler’s ice cream later in the afternoon? My grandfather usually picked a rib eye steak sandwich while my grandmother chose a pork burger.  In honor of these precious memories, I decided a pork burger would be a nice change from our usual beef burger. The texture of a pork burger is somewhat different. The meat is more tender and less grainy in texture. The pork is a more subtle flavor that can be easily complimented with spices, such as the cumin I used here. 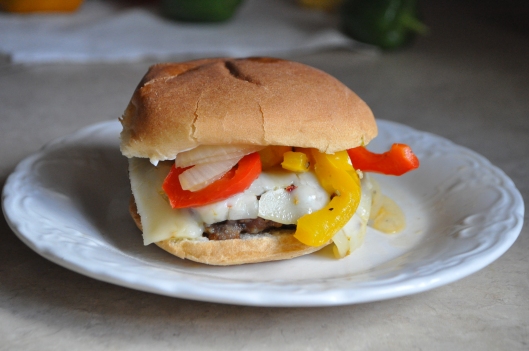 Pork Burgers with Peppers and Onions (from Martha Stewart)

Prepare your charcoal grill to medium high heat. In a bowl, combine the pork with the cumin. Form into 4 patties. Make a foil packet to hold the onions, peppers, and the olive oil. Season with salt and pepper. Grill the burgers until the juices run clear, about 5 minutes on each side (maybe a bit longer depending on how hot your grill is). Grill the veggie packet until the veggies are tender. On the toasted buns, add a burger. Top with a slice of cheese and a good amount of the peppers and onions. Use other condiments if desired (I used mayo). Serves 4.

I love tuna because it is such a quick source of protein. I eat it a lot and am always on the lookout for new ways to try it, other than the usual tuna salad. This recipe is fantastic! I made it the night before my work week. It was super convenient just to grab a sandwich and go. The flavors complimented each other amazingly. I definitely will be making this again soon! 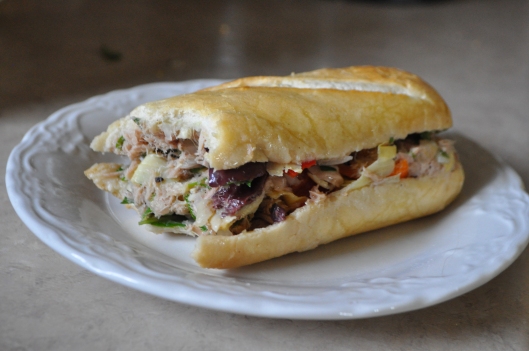 Pan Bagnat (a variation of a recipe from Food52)

Slice the loaf of bread in half lengthwise. Remove some of the insides of the bottom half to create a trough into which the filling will go. Brush both halves with a little extra virgin olive oil. Rub each with the garlic. Line the half with the trough with the basil leaves.

In a mixing bowl, combine the tuna, olives, red bell pepper, onion, parsley, and artichoke hearts. In a measuring cup or small bowl, whisk the lemon juice into the olive oil until well combined. Pour the vinaigrette into the tuna mixture and stir to combine. Season to taste with sea salt and pepper.

Spoon tuna mixture into the trough of the baguette over the basil leaves. Wrap sandwich well in plastic. Crush it down by placing a brick or heavy cast iron skillet and refrigerate, preferably with the weight, overnight.

Maybe there is no actual place called hell. Maybe hell is just having to listen to our grandparents breathe through their noses when they’re eating sandwiches. ~Jim Carrey

Who doesn’t love cheesy, meaty goodness? I love making these sandwiches because they are so quick to throw together and can be made any time. If you want dinner at  5 and the hubby can’t eat until 8, it will still be delicious (maybe more so- I think time improves spaghetti sauce). 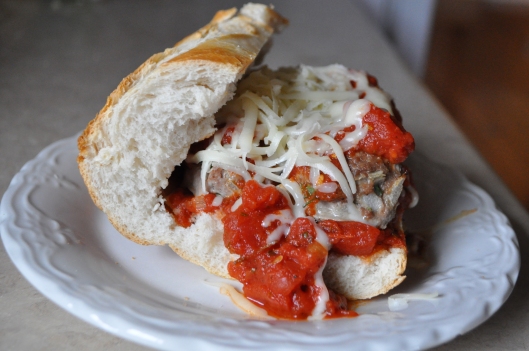 Split the loaf of bread horizontally. Top the bottom half with the meatballs and sauce. Sprinkle with cheese. Top with second half of bread. Cut into sections. Enjoy!!!!

This is a sandwich that would make Dagwood proud. Beefy, porky, cheesy, and greasy. It’s not the boring ham and cheese on white bread sandwich that we all dread coming home to but it is almost as quick to assemble. I really like the cheddar sauce and plan to use it on other sandwiches.  These would be a great thing to serve and your NCAA basketball championship party or similar such events. 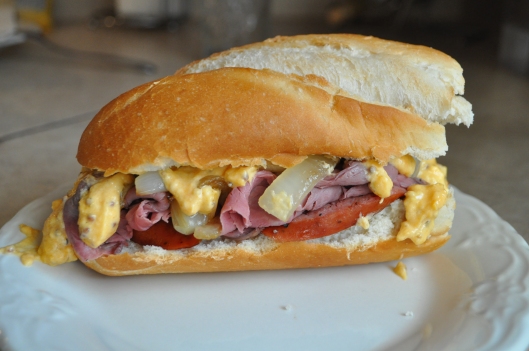 Beef & Kielbasa Sandwiches with Sauteed Onions (via the Unorthodox Epicure)

In a heavy bottomed skillet, saute the onions until starting to brown. Fry the sausage until lightly browned. In a bowl, combine sauce ingredients. Place in microwave for about 10-15 seconds, until cheese is melted. Whisk until totally combined and melted cheese is blended into sauce. To assemble the sandwiches, layer the onion, beef and sausage. Top with several dollops of the sauce. Makes about 6 sandwiches. 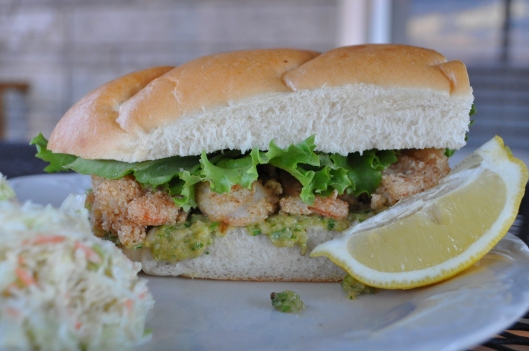 Soak the shrimp in buttermilk for 30 minutes to an hour. Combine flour, cornmeal, and your desired seasonings (I used Old Bay, cayenne, and Cajun seasoning). When ready to fry the shrimp, heat plenty of oil in a small sauce pot. Drain extra buttermilk off the shrimp and toss into the cornmeal mixture. Drop four to five shrimp into the hot oil and cook for 3 to 4 minutes or until shrimp is done but not over cooked. Drain on paper towels. On the French bread, spread a healthy layer of remoulade sauce. Add shrimp, lettuce, and tomato. You can also add onions and pickles. 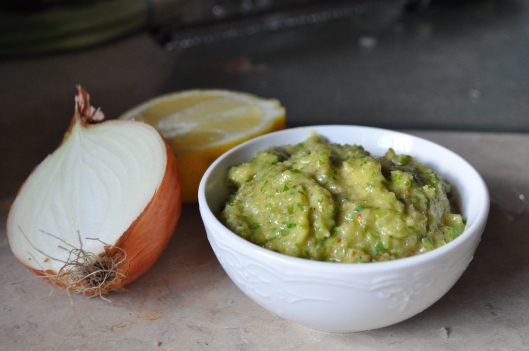 Combine all ingredients in the bowl of a food processor and process for 30 seconds. Use immediately or store. Will keep for several days in an airtight container in the refrigerator.

For more recipes in this series, check out these links:

I made this lovely little tapenade for the Spicy Italian Sandwich that I posted a few days ago. Even though I used it as a sort of relish, it would also be good as a dip with pita chips. Plus, it keeps a while in the fridge! So you can use this again and again to liven up those cold cut sandwiches. 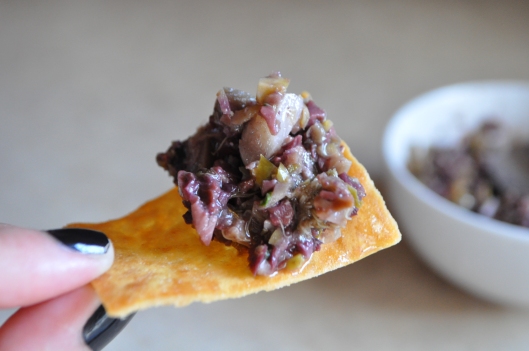 One Year Ago: Tilapia with Tomatillos

Place all ingredients in the bowl of a food processor. Process to combine, stopping to scrape down the sides of the bowl, until the mixture becomes a coarse paste, approximately 1 to 2 minutes total. Transfer to a bowl and serve.

Today is the first day of Greenbay Packer football. My husband is a huge fan. So, needless to say, he really looked forward to today’s game. Special events should be accompanied by special food like this yummy sandwich. It is perfectly quick so you too can watch the game. 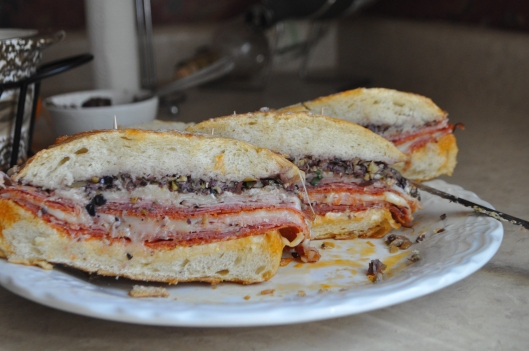 Split the bread in half using a serrated knife. Remove some of the center breading so that the bread half looks like a very shallow bowl. This makes room for the tapenade. Spread the bottom half of the bread with the mayo and the whole grain mustard. 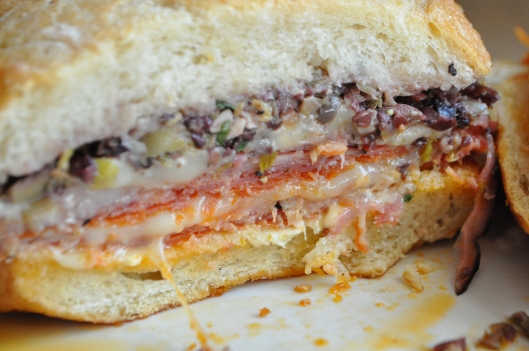 In non-stick skillet, warm the meat in individual slices to help release a little extra flavor. Layer half of the pepperoni, then half the salami, half of the ham, and half of the cheese. Repeat the last step. On the top bread half, thickly spread the olive tapenade. Place the bread halved together and wrap the whole sandwich in foil.

Preheat the oven to 350 degrees. Place the bread into the oven and bake 15 minutes. Remove from the oven and slice into 4 servings. Enjoy with a good beer! 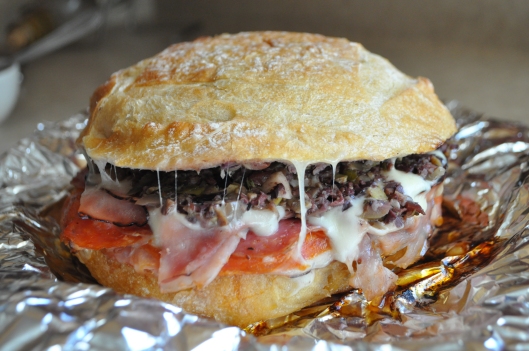