I don’t normally post two recipes at the same time but these two go together “like peas and carrots” as Forrest Gump would say. I love the flavor of the beef by itself. Drizzling the gravy over the vegetables takes them to a whole other level. If you want a meal to showcase all the best food things of fall, this is the meal for you!

Remember to take the beef out of the fridge at least 10 minutes before you sear it or put it in the oven, this will ensure even cooking.

Make a sauce with the pan drippings by placing the roasting pan on the stove top over medium heat. Add beef broth or red wine (I did the wine) and reduce it down to your desired amount.

Cook bacon in a large cast iron skillet over medium heat until crispy. Remove the bacon and drain on paper towels. Drain the skillet, reserving 2 tbsp of the drippings. Coarsely chop the bacon.

Add oil to hot drippings in the skillet. Cook onions and sweet potatoes over medium heat for 5 minutes, stirring occasionally. Add turnips and cook for another 8 minutes. Combine vinegar and 2 tbsp water. Add Brussles sprouts, garlic, and vinegar mixture to the skillet. Cover and cook, stirring occasionally, for 5 minutes or until the veggies are tender. Stir in the bacon. Season with salt and pepper to taste. Serves 8.

This is my second year growing my own garden. I have had success and failure both years. I am not nearly as good at this as my grandparents. I don’t know very many tricks of the trade. But I am learning new things each year. 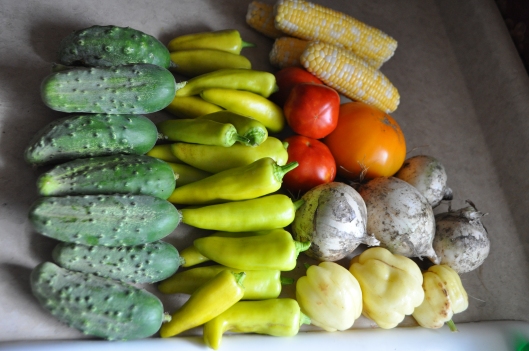 You can use a 1:1 parts Epsom salt and water mixture to spray your bell pepper plants that bloom and bloom without every bearing fruit. Apparently this malady is caused by a lack of magnesium. Who knew?! 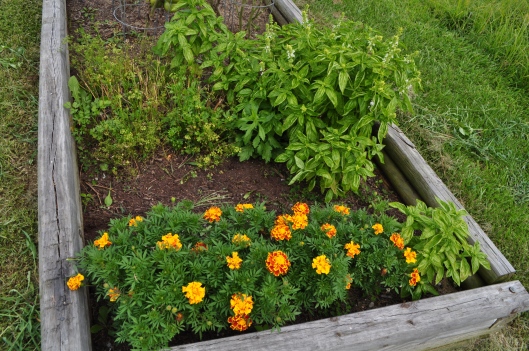 Cucumbers vines trellis really well but you have to look for new cucumbers nearly every day, otherwise they turn into orange or yellow monstrosities that are disgusting! I knew this already but I always had my mom reminding me to go look at them. 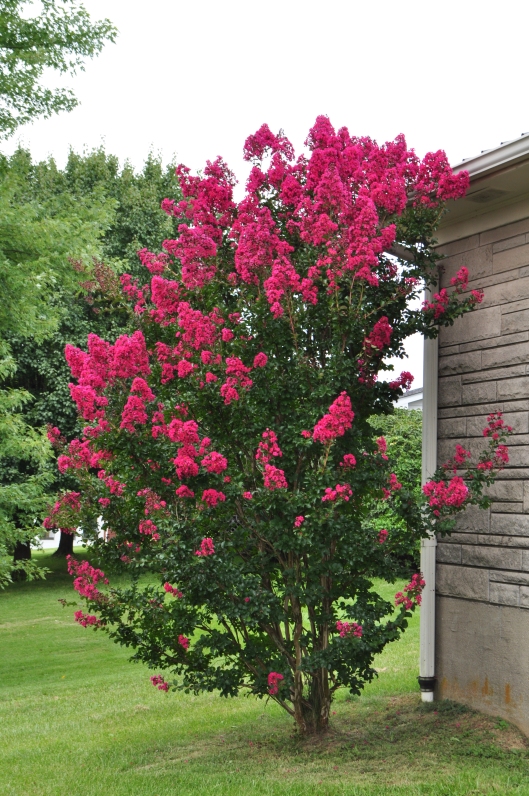 Place tomatoes on your counter stem side down. This slows the rotting process.

What great garden or vegetable tips do you have?

I love good cheese and vegetable salad with a nice vinaigrette. The fresh cold salad is great for these increasingly hot days. I love that you can make them in advance and that they make great leftovers.

A Cheese and Tomato Salad

Combine all the ingredients into a bowl. Mix well. Chill until serving time. It’s better if the flavors have time to meld.  Serves 4.

Want to buy gorgeously fresh produce that tastes better than anything you’ve ever bought at the grocery?

Want to support your local economy?

Want to know where you food actually comes from?

The gorgeous bread pictured below is from the Berea Farmer’s Market. Photo credit to my friend, Beth.

Lentils are a great little bean. Tasty, versatile, cheap, and used in all kinds of cuisines. Lentils (and other beans) are also a great way to expand a recipe when you don’t want to use a lot of meat. Full of fiber and nutrients thanks to all the vegetables, I plan to use more lentils next time I make this recipe. 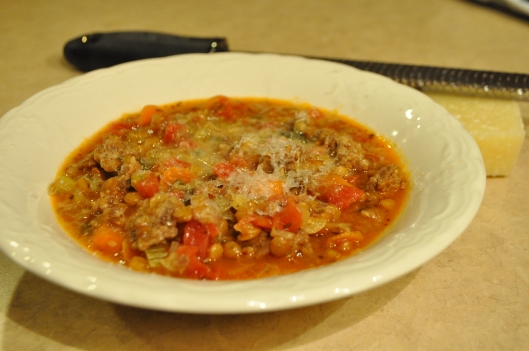 Sausage and Lentil Soup (inspired by My Baking Addiction)

In a large bowl, cover the lentils with boiling water and allow to sit for 15 minutes. Drain and set aside. In a Dutch oven, fry Italian sausage until cooked through. Drain sausage on paper towels. To the Dutch oven add olive oil, onion, celery, carrots, and zucchini. Saute on medium heat for 5 minutes. Add garlic cloves, basil, oregano, and thyme. Cook for 2 more minutes. To the vegetable mixture, add the lentils, sausage, broth and tomatoes. Reduce heat and simmer until lentils are tender, about an hour to 1 1/2 hours. You may need to add more chicken broth to reach your desired consistency. We like things a little thicker, more like a stew. Garnish with Parmesan cheese and fresh herbs.

Breakfast on Christmas morning should be tasty and quick. You don’t want to take too much time away from opening Santa’s presents. Any ingredient you would add to an omelet can be added to this casserole.

In an 8×8 inch glass casserole dish, combine the bread, sausage, bell pepper, mushrooms, spinach, and cheese. In a bowl, whisk together the milk and eggs. Pour over bread mixture. Refrigerate over night. Bake at 350 degrees uncovered for about 40 to 45 minutes.

All batters should be made from cornmeal. Squash, fish, okra… You want to compliment the food, not overwhelm it with some heavy, greasy batter.  Simple is the best. 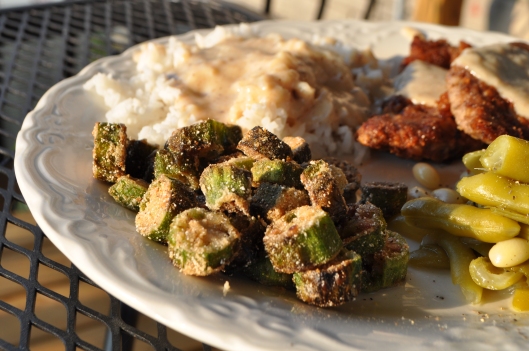 Combine cornmeal, flour, salt and pepper in a ziploc bag. Add okra slices in batches, and toss to coat. Heat enough oil in a cast iron skillet to fry a batch of the okra.

When oil is hot, add okra in batches. I changed the oil between the batches to keep it from tasting burnt. Fry okra until brown on all sides, stirring frequently to prevent burning. Drain the okra on paper towels to get rid of the excess. Season to taste.

My husband hates brussels sprouts. I love them. So, despite his protests against this vegetable, I concocted this recipe. It is a combination of several recipes I have seen and is tailored to our tastes. After tasting these, my husband said, “Everything is better with bacon”. He had a second serving too. 🙂

My grandfather first got me to try brussels sprouts by calling them “baby cabbages”. That just fascinated the five-year-old me. Since then, I have loved them. They are really healthy too. High in many vitamins including vitamins C and K, folate, and dietary fiber. Low in calories (though probably not with the bacon). Sometimes I get bored with the same vegetable sides- green beans, corn, peas, beans. SNORE! These baby cabbages perked up any meal. I served these with pork marsala and mashed potatoes last night. Try these, even if you don’t think you like brussels sprouts. 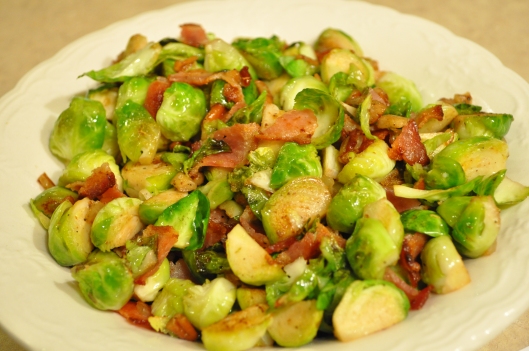 Fry the bacon until crisp and then drain on a paper towel; set aside. Reserve one tablespoon of the bacon grease. While the bacon is cooking, rinse and quarter the brussels sprouts. In the skillet, melt the butter in the bacon grease. When melted, add the onion, sprouts, salt and pepper. Saute the ingredients over medium heat until the sprouts are tender. In the last minute of cooking, crumble the bacon and add to the sprouts.

I had a couple of extra head of baby bok choy from the stir fry earlier this week. I needed a way to fix it other than just steaming it or something equally as boring. I found this recipe on AllRecipes, a place where I find many good recipes. After I tasted the recipe, I wished I had more bok choy. One serving was simply not enough. If you have never tried bok choy, you will certainly like it this way….

Fry bacon in a large skillet over medium heat until crispy. Remove bacon and drain the fat, reserving one tablespoon of the grease in the skillet. Add the olive oil, onion, red pepper flakes and garlic. Cook and stir over medium heat until the onions are starting to be tender. Add the bok choy, and place a lid on the pan. Let cook for 3 to 5 minutes. Remove the lid; cook and stir until the bok choy is tender but still crunchy, about 2 minutes. Stir in the bacon, and season with salt. Serve piping hot!

My junior year of college I had the privilege of traveling to Japan as a student craftsperson. At County Fair held on the grounds of Seisen Ryo (the hotel where we stayed), I demonstrated how to braid the brooms made at Berea College. The experience was life changing. I met amazing people, ate wonderful new foods, and was exposed to a fantastic culture.

Below: The most delicious thing I ate the whole time in Japan was this creamy vanilla pudding with fresh fig, kiwi, pear, and grapes topped with raspberry sauce. Unbelievably good!

Since coming back to the US, I have tried to incorporate some of Japanese food into my own menus. Soba, a noodle made of buckwheat, is a traditional Japanese ingredient I have access to in KY. When I ate it in Japan, it was prepared in a broth with scallions and mushrooms. Very filling and like a fancy version of ramen noodles.  Today’s recipe is one of the best ways I have found to serve soba.

In a medium bowl, whisk together broth, soy sauce, cornstarch, hoisin, vinegar, and sriracha. Set aside. Heat a large nonstick skillet and add 1 tbsp. Saute chicken until no longer pink in the middle; set aside. In skillet, add second tbsp oil along with bok choy, onion, and garlic; stir fry for 3 minutes. Add snow peas and peppers and stir fry for about 4 minutes or until tender crisp. Cover part of the time. Stir in sauce and chicken. Bring to a simmer and cook until sauce starts to thicken or about 2 minutes. In a large serving bowl, combine soba and sesame oil. Toss in vegetable and chicken mixture. Garnish with scallions.  Makes 4 servings.